We love cooking on our barbecue, from shrimp tacos to smoked nuts, but baking is my favourite. So when our next Pataks Mom program asked us to focus on the barbecue I thought that would be the perfect time to try a little Indian baking as well as convert our barbecue into a tandoori oven.

Of course you’ll find a whole lot of barbecue meal inspiration from the other Pataks Moms, like North Shore Mama’s Sweet Mango Chutney Chicken, Carol au Courant’s Grilled Tikka Masala Shrimp & Avocado Salad, and Grilled Butter Chicken Pizza from Suburble. All great dishes for the grill but what about baking?  Ever since I tried baking cinnamon buns on the grill I’ve been keen on barbecue baking. For a little Indian twist it made sense to bake bread. I thought of naan especially since I had gathered a list of homemade naan recipes (including one specifically developed for the green egg). But doing a little research I discovered Food for My Family’s Chapati unleavened flatbread.

I’ll admit the simple ingredient list also drew me in. This recipe only has three ingredients (flour, olive oil, and water). Of course even without using yeast the dough preparation isn’t instantaneous so there is a little prep and wait action. Using our cast iron griddle we cooked each flatbread over the flame. The cooking process was rather quick, cooking one side until bubbles appeared on the top and then flipping. Kept warm in a towel, the bread was a great treat with Pataks Major Grey Chutmey.

Indian baking isn’t just about bread. Like the cinnamon buns, treats are always well received and when I found a recipe for nankhatai cookies from Food Wanderings I couldn’t wait to try cooking them in on the grill. I was especially intrigued by the use of cardamon, which offered an unexpected taste for the cookies.  I made these a tad bigger than expected as I used a tablespoon to shape them. It was just by coincidence that the spoon was heart shaped. Little heart treats baked on parchment paper in the barbecue. I originally kept the pistachio nuts out so the kids could take these to school as a snack but they were gone before the weekend was through. I think I’ll toss the nuts in next time to see how they change the flavour. 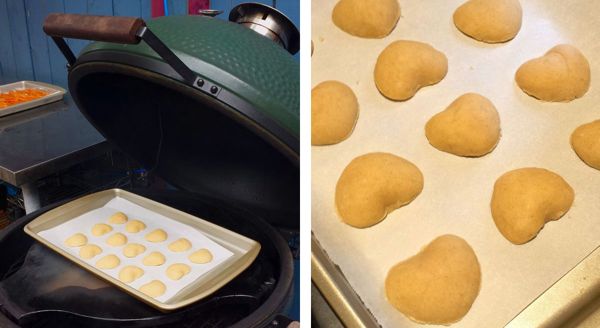 Another great snack or side dish for the barbecue is Curry Sweet Potato Sticks (inspired by Veggie Belly’s Indian Spiced Potato Chip Sticks. I had two sweet potatoes in the cupboard so I peeled them (I usually like peels on my potatoes but not sweet potatoes) and then sliced them up really thin. Then I used Patak’s Mild Curry Paste which sits in my fridge ready to be added to any dish for inspiration. I brushed on a little olive oil as they lay flat on parchment paper and just put the whole tray in the barbecue. Unlike regular potatoes I find sweet potatoes are a little softer so they took longer to crisp (to get past that “doesn’t quite taste cooked” stage). Everyone loved these and they made a great afternoon snack while we prepped the barbecue for additional cooking. 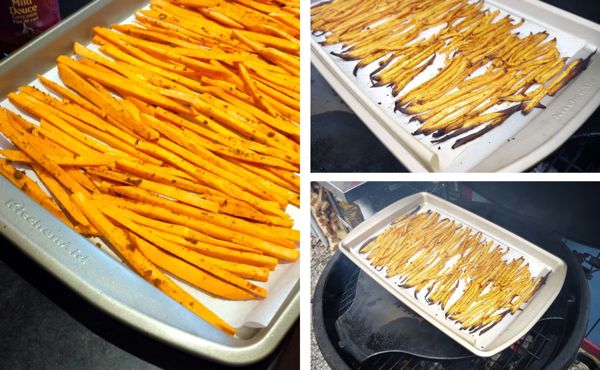 One of the reasons we bought our Big Green Egg last year was to extend our cooking season. The design of the clay cooker retains the heat so well. This is what makes it a great tool for baking (though we had great success using our Weber grill and smoker doing the same thing last year).

I have also heard you can also stoke the fire to increase the temperatures to high levels, high enough to match that of a tandori ove (900F). That coupled with the barbecue’s ability to retain the heat we decided to give it a shot and use our Big Green Egg like a tandoori oven to cook some chicken tikka. Using the Patak’s Tikka Curry Paste I made a curry to marinade the chicken the night before.

The idea behind a tandoori oven, so I’ve been led to believe, is high heat but also not disturbing the food while it cooks. Opening a barbecue causes the heat to drop and then you have to build it back up again. The Big Green Egg has a chimney so our plan was to skewer and lower the chicken into the heated oven, as per Jamie Thingelstad’s  post (a great post if you’re looking at trying this yourself).

It didn’t take long to get the temperatures up to past 700F. At some point I thought we broke the Egg since the temperature gage was pointing to the low 100s but that was just because we let the temperature rise past the gage’s 800F reading. It wasn’t as hard as I thought to get the skewers down the chimney and into the oven. I was even surprised that the chicken didn’t just slip off but it held strong. Although we had four skewers of chicken we could only fit two comfortably down the chimney which meant a little longer cooking time but the chicken cooked fairly quickly, about 15 minutes, well most of it. 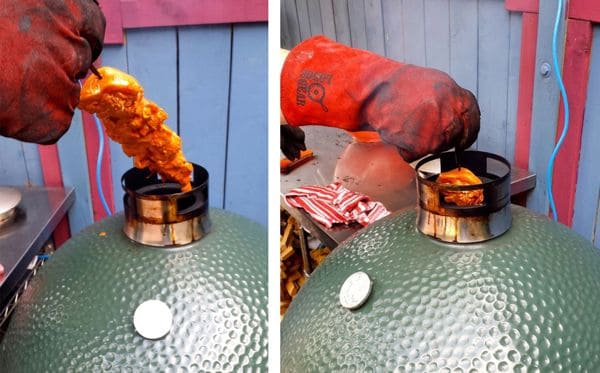 The pieces that did cook as planned were amazing. Not too dry and a lovely black and reddish coating. I must admit it was the best chicken we’ve cooked on the barbecue.

But we did learn a few things for next time (because there will definitely be a next time). Two things in particular:

Mishap aside, I loved the Patak’s Tikka Curry Chicken done in our makeshift tandoori oven.

Disclosure: I am part of the Patak’s Canada Ambassador program with Mom Central Canada and I receive special perks as part of my affiliation with this group. The opinions and experiences on this blog are my own.