During my high school days we only had to worry about notes and whispers behind our back. I didn’t even own my first mobile phone until I was in my twenties. Now smartphones proliferate the school yards and classrooms and with it comes a whole other realm of social behaviour.

With my oldest entering her teen years, as well as being active on social media and her Junior Style Blog, I often worry about what goes on in her cyberspace world. It is also the reason why I was so eager to see the latest production at Young People’s Theatre, tagged, from Green Thumb Theatre.

The anonymous online world gives us permission to say and do things we would never do in real life. But where do we draw the line between fun and maliciousness? The harsh realities of cyber bullying and what happens when we’re discovered come to a head in tagged. As an Officer investigates Jerri and Webber, two young adults, in the incessant online harassment of a fellow student, not all is as it appears to be. Do these teens actually understand the consequences of their actions? Or have they even caught the right people? How responsible are we for the words that we type and what they lead others to do? Torn from the headlines, tagged dissects the dangerous potential for harm that exists between social media and young minds.

I’ve attended a number of plays in the past at this theatre but this was the first production I watched in the Studio Theatre on the third floor of the building. I actually think this space worked well, providing a more intimate setting for a sensitive topic. The set design was simple enough with the scene occurring after an alleged event and in a police station questioning room.

The whole story unfolds through the conversations between the constable and teens Jerri and Webber in two separate parts of the stage (acting as two separate rooms in the police station). The lighting did a great job focusing your attention, watching as the constable pieced together elements of the events, moving from one “room” to the other seamlessly

Flashback sequences were used to transport us back to some of the events, changing the environment with projected images. Other social media elements were included, such as twitter conversations, YouTube videos, and camera phone images to add to the story in a relevant way and add legitimacy to the characters. The only element that bugged me was Webber shooting video horizontally, something frowned on by regular YouTube users (and out of character for someone who is active in YouTube). Add to that his occasional moments of switching his phone from horizontal to vertical when filming friends in one of the flashback sequences really stood out. Even my daughter noticed this faux pas though it didn’t take away from the overall message and performance experience. 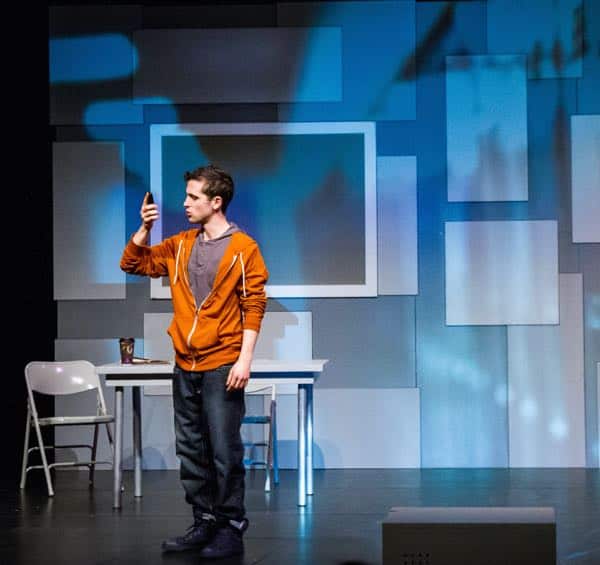 There were a number of important issues raised in tagged when it comes to teens and social media. Some we as parents may know and others not so much:

I find social media has a way of separating the person from the act; the computer or phone screen creates a wall. People seem to do things in this world that they would normally not do in front of others, the person being attacked. tagged sheds light on the other side of the screen and the impact POST or SEND can have on others.

tagged opens up the opportunity to have a discussion with your teens as they spend more time behind a screen. Our role as parents is to help our kids to understand their actions, how to protect themselves and their friends, and what to do should they feel harassed. tagged is only playing for a short time, ending May 8, 2015.