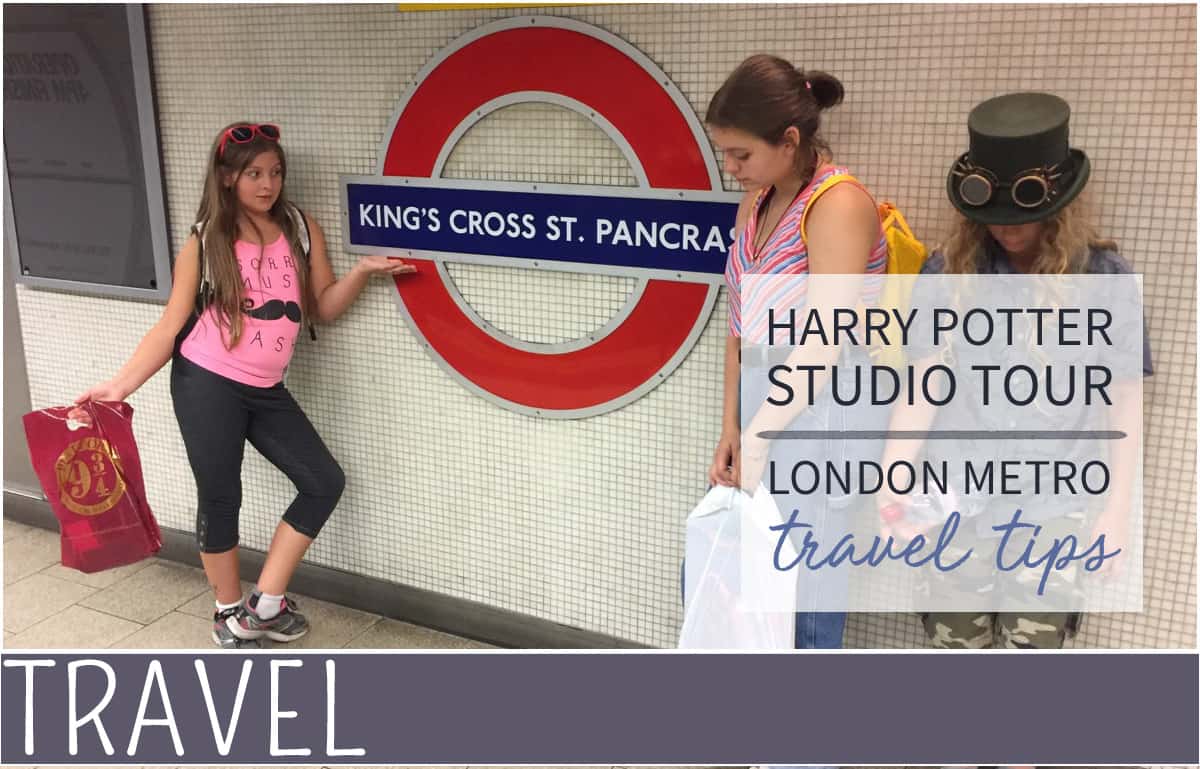 A visit to London with the kids will probably mean a little Harry Potter fun, including our favourite, the Warner Brother’s Harry Potter Studio Tour. Why not expand on the experience by getting to the London Studio Tour by taking the metro, as if you’re the kids boarding the Hogwarts Express. That’s how we made our visit and loved it but I do have a few tips on making the most of this journey (cost and time wise).

The Warner Brothers Studio is located in Leevesden (about an hour North of central London) and is home to all eight Harry Potter films, a fact I only discovered on the studio tour. The Studio Tour is located adjacent to these working film studios and is easily accessible by metro though free parking is available for those who choose to drive.

When booking your tickets, you want to grab a tour time that’s early enough in the day (the self-guided tour takes about 3 to 4 hours to complete) while still avoiding rush hour travel window of 6:30 to 9:30 a.m. or 4:00 to 7:00 p.m. (Monday to Friday). You should note when traveling the London Overground from Euston (National Rail Station) to Watford Junction only evening rush hour applies and from Watford Junction to Euston (National Rail Station) only morning rush hour applies, the opposite way you’ll probably traveling to go to the Studio Tour. 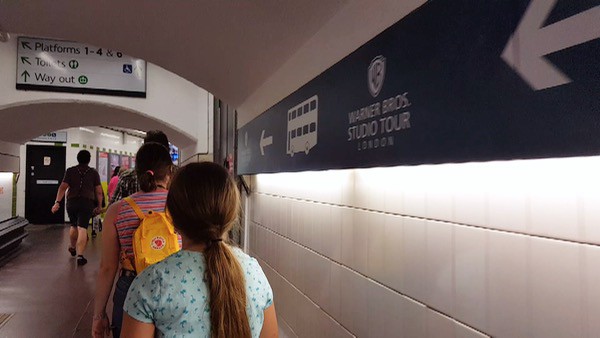 Check the route guide to determine the best option, how long it will take, and when you have to leave to meet your planned tour time. Sometimes delaying your departure by a few minutes to just after 9:30 a.m. can cut your ticket cost.

USE AN OYSTER CARD

If you’re traveling around the city while on holiday, you’ll probably have either a travel card or pay-as-you-go Oyster card. Paying for your rail travel from London Euston Rail Station to Watford Junction Rail Station on your Oyster card will be cheaper than buying a separate rail ticket. 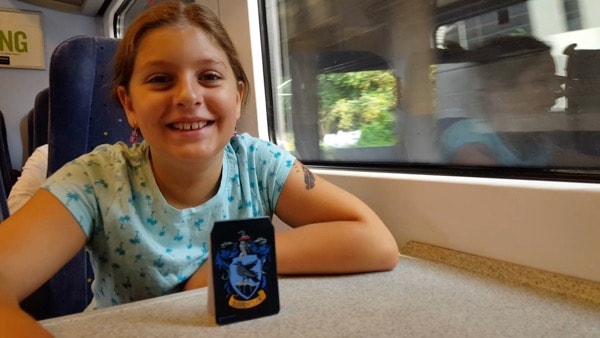 The nice thing about having an Oyster card is the ability to have a 7-day Travel Card (zone 1 & 2) for our main travel and add extra pay-as-you-go funds to cover extras like the Watford rail cost.

So instead of paying 9.90 pounds per adult it would only cost 5.30 pounds each. Multiply that by a return trip and your Oyster card has just saved you about 9.20. Plus there’s no need to go to the ticket window or worry about another ticket.

Although kids 5 to 10 usually pay a discounted adult fare on the National Rail Line (only kids 0 to 5 are free), there is an exception between Euston and Watford Junction so we discovered. Since the National Rail line and the London Overground share this same route between Euston and Watford Junction and kids 5 to 11 ride for free with a paying adult on the London Overground, an exception has been made to those riding the same route on the National Rail. This just means like when riding on the underground, your child must pass through the larger luggage gates with one of the traveling adults.

MIND THE TRAIN YOU TAKE AT EUSTON STATION

When you arrive at the Euston Rail Station (you’ll have to walk down the street from the Euston Underground Station), the monitors will indicate which platform to catch the train to Watford Junction. But there are two trains you can take. 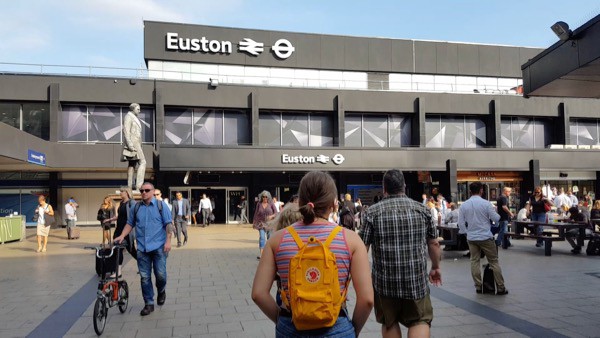 One is the London Overground which can take almost an hour to get from Euston to Watford Junction by way of many train stops. The other is the London Midland rail which takes about 15 to 20 minutes and only stops at two addition stations before hitting Watford Junction. The great thing is, they tend to be on platforms right beside each other. Be sure to check the route monitor on your platform to ensure Watford Junction isn’t the last stop in a long list of stops.

HAVE EXACT CHANGE FOR THE SHUTTLE BUS

The WB Harry Potter Studio Tour does offer a shuttle bus from Watford Junction to the front door. The buses run every 20 minutes and the journey is about 15 minutes from station to studio. Watford Junction had a number of markers to ensure commuters were going the correct way to find the buses though the station is relatively small.

The journey can be had for £2.50 round trip per person but the drivers are not always in a position to provide change. Make sure you have exact change to avoid any issues and to speed up you bus access. 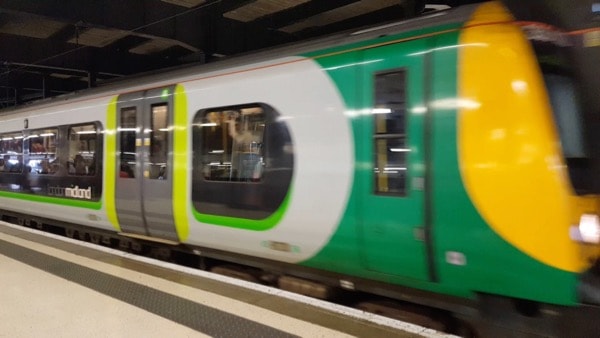 SHOW YOUR TOUR TICKETS TO ACCESS THE SHUTTLE BUS

When you pay for your round trip shuttle bus fee you’ll be given a receipt for your payment. Don’t be tempted to toss this away as you’ll need it for your return visit. When you step abord the shuttle bus after your tour to head back to Watford Station, the driver will need to see this receipt to confirm you’ve paid or else you’ll be paying for a one way ride which £2.00 per person.

I think our favourite part of taking the London Transportation system, even if it meant taking a few different mode of transportation, was that it added to the who illusion. The kids loved imagining that they were boarding the Hogwarts Express. For added fun, you could start your journey at Kings Cross Station and grab a photo at Platform 9 ¾. I hope you find these travel tips just as handy as we did when making our way to the Warner Brothers Harry Potter Studio Tour just outside of London.

If you’re still debating on whether the journey to the tour is worth it, checkout some of the fun we had in the video below:

This would certainly be a experience I would recommend to any Harry Potter fans heading to London. We found the perfect apartment in the city for our family of five and I posted a room tour here.