Disney has always had a way of making magical worlds and WestJet is like the magic carpet to get you there. Now WestJet, WestJet Vacations and The Walt Disney Company (Canada Ltd., Parks & Resorts bring a little Frozen magic in the form of their second custom-painted Disney-themed aircraft. The new plane revealed early Sunday morning to a crowd of employees, fans, and media, features Anna, Elsa and Olaf from the highest-grossing animated film, Frozen.

“This aircraft takes the relationship between WestJet and Disney to a completely new level of cool,” said Bob Cummings, WestJet Executive Vice-President, Commercial. “Two years ago, we launched the #MagicPlane, our first Disney-themed aircraft, and no matter where it flies throughout our network, it is the most-anticipated and most-photographed aircraft in WestJet history. Today, we are proud to team up with our great friends at Disney to create a sequel like no other.”

Like Olaf who lives in a land of snow but loves the lure of summer, the new #DisneyFrozenThemedPlane transitions from winter to summer on the outside of the plane. It seems the paint team watched Frozen to get into the spirit of their work and it shows. According to WestJet the job took 21 days of 12-hour rotations involving a constant crew of six painters working 24/7. I love the idea that sparkles were added to the paint to add a little shimmer and shine as it moves. 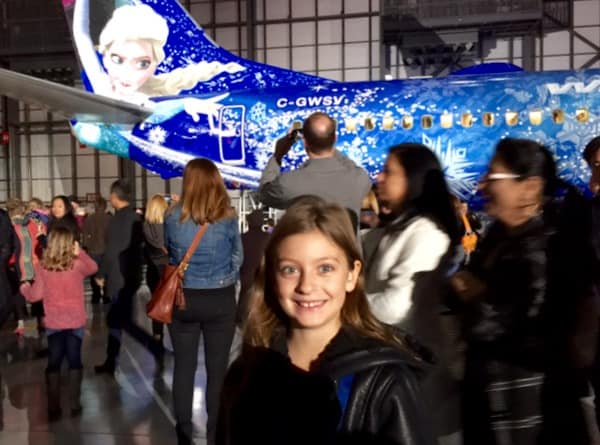 The theme isn’t just added to the outside of the plane. Guests boarding the new Frozen plane will notice the transition from winter to summer in the interior. The 54 separate overhead bins mimic the winter to summer design with a unique Frozen decal. I loved the transition as we walked down the plane corridor. Just like Disney, WestJet remembers the details, adding three different headrest designs depending on what part of the plane you are in. They even added a little frozen fun in the plane’s washroom. 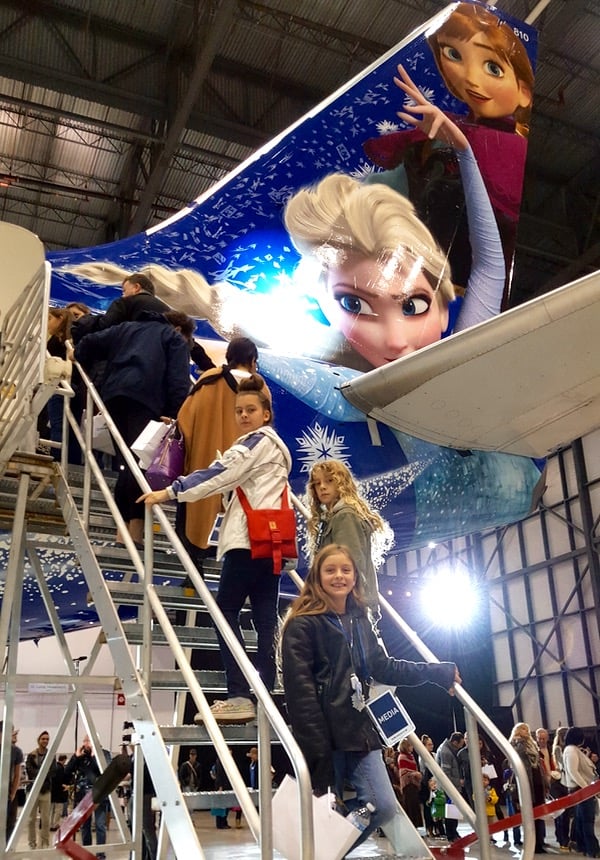 WestJet runs 43 flights a week during peak winter months from Vancouver, Calgary, Edmonton, Winnipeg, London, Kitchener-Waterloo, Hamilton, Toronto, Ottawa, Montreal, Halifax, Moncton, Charlottetown, and St. John’s.  You can bet that families planning a trip to Walt Disney World with WestJet Vacations will be hoping to start their magical holiday on this Frozen-themed plane. Checkout WestJet Vacations for savings on your next Walt Disney World vacation.

We had a chance to tour the outside as well as the inside of the new Frozen-themed plane and put this little video together for you: