Editor’s note: The following traveller’s tale was written by our own Junior Style Blogger and earned her a finalist potion in the 2015 Family Travel Forum Teen Travel Writing Scholarship.

I yawned for what felt like the twentieth time to clear my ears. The sign out my window said 5,000 feet. The road got thinner and uneven which resulted in many jolts and jerks as we made our way to the top of the dormant volcano. The sun was still beaming through the wispy stretched out clouds and by the time we had hit the 7,000-foot mark, the clouds had fallen to eye level. However, the rest of the journey still remained. Palm trees turned into pine trees and then it was just hills of rock, dust, and some scrub.

At last we arrived just below the 10,000-foot mark of the Haleakala Crater and everything surrounding us was gray and red rock. We pulled into one of the parking spaces and I awkwardly slipped my sweat pants over my neon pink shorts and put on my sweatshirt. Maybe it was the thinner air affecting me but I was beyond excited, so much so that I could hear my heart pounding in my ears. I was above the clouds; I was a bird, a plane seeing the world from a new perspective. 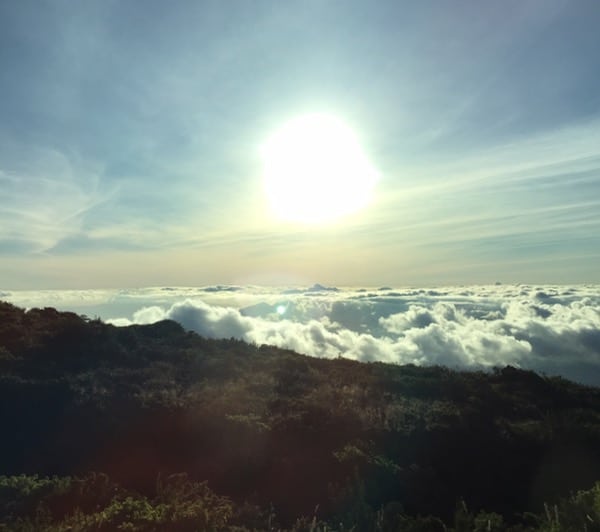 Even stuffed in my hoodie pockets, my fingers were red and shaking. Who knew that just hours ago I was trying to cool off from the heat. It was like another world. It had only been half of an hour waiting for the sun to set but it felt like a lifetime. At long last the sky began to melt into delicious warm colours. First hot pink followed by gold and then amber. The colours melted together as if the sky was cooking a fall festival, and I was in complete awe.

So this was why the parking lot was full of tour buses and cars, why the people lined the railing overlooking the now red rock landscape from the sinking sun.  For many visitors their journey was done. They witnessed the glorious sky show and now they made their way back down the hour and a half mountain drive.

Even as the crowds decreased, the sky just got more vibrant. We drove up the small hill towards the Haleakala summit plateau. There were no banisters here, allowing me to look straight off the peak, seeing as far as the West Maui Mountains. It was like flying.

It all happened so quickly, like watching a time-lapse video. The colors faded into greens and blues, and colours I never imagined existed. Then everything melted into a creamy pitch black. It was truly breathtaking.

We took refuge inside an observation building where we waited for it to become dark enough to view the constellations. This felt like forever, staring into the skies ink-coloured eyes. We made friends with another family waiting out of the cold, making casual conversation.

Then a streak in the sky! A shooting star; the first I had ever seen. It looked as if someone had just torn the sky in half. As we moved outside to see the tail of the rocket star the other stars slowly became visible one by one.

It was as if a designer was deciding where to put sequins on a coal-black dress, carefully plotting out where each one would look best. Never in my life would I have imagined that I would be 10,023 feet above sea level watching stars slowly set a scene, but in that moment I knew this is where I wanted to be.

1 thought on “Above the Clouds in Maui”