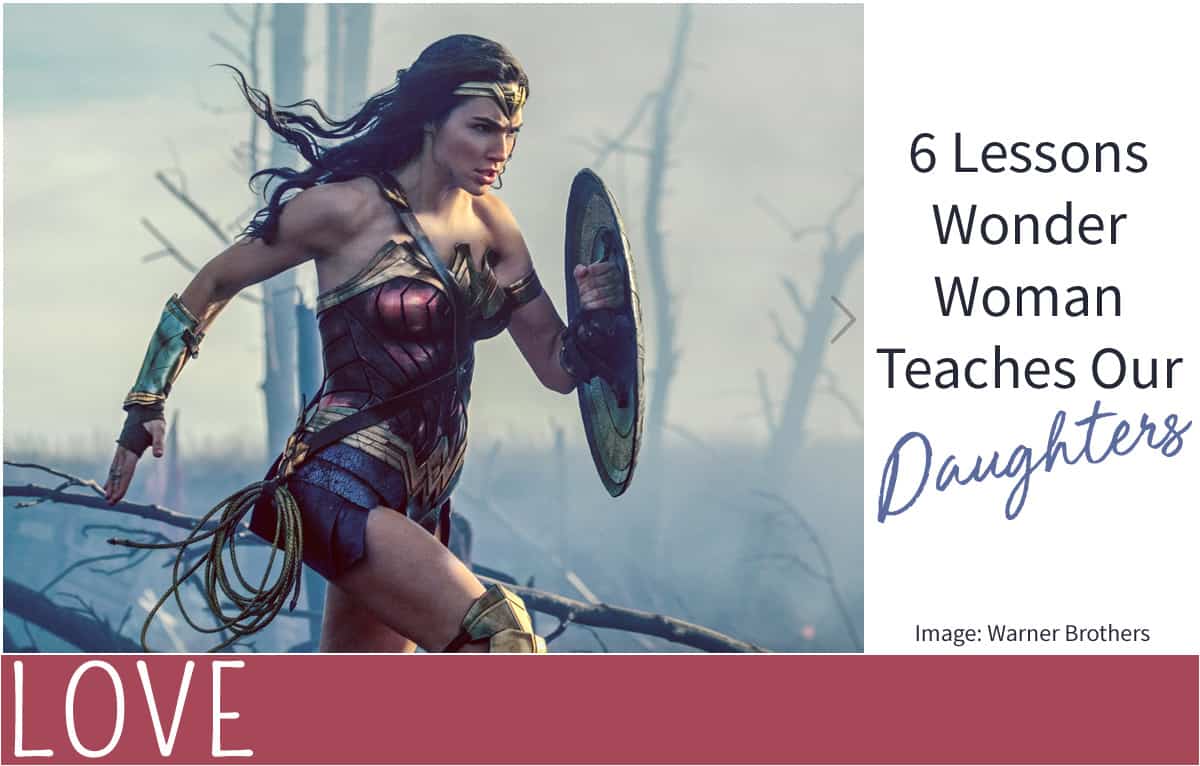 I am a huge action film fan, so when I first caught a glimpse of the trailer for Wonder Woman – Rise of the Warrior, it was definitely on my summer movie wish list. This past weekend, thanks to my son’s birthday wish to see the film, I crossed this off my list. I expected to enjoy it but what came to me in the full dark theatre during our matinee showing, was just how impactful the film is and the lessons Wonder Woman teaches our daughters.

What Wonder Woman Can Teach Our Daughters

Lesson 1: Being Strong is Attractive

As women and girls we’re often told to be feminine. Strength, whether physical, emotional, or mental, is often portrayed as a masculine trait and not attractive on women. Diana makes no bones about speaking her mind and she certainly doesn’t shy away from demonstrating to others her self confidence. This sense of inner Strength, her belief in herself, makes her a commanding presence that is attractive. It’s no wonder men and women crush on her.

Men and women will follow male leaders but there is often a misconception that most men will not follow women leaders. I’ve seen this same logic applied in elections at my children’s school, with students voting for boys because, well they were boys and perceived as better leaders. Although Steve Turner leads Diana to London and even recruits the members of their small mission troupe, it’s clear that she is who they are following. Her commitment and ability to bond with the team has them ignoring gender and focusing on a leader.

Lesson 3: Not All Women are Good

Often villains in films are portrayed by men. Good or bad, one of the main villains within Wonder Woman, Dr Maru (Dr Poison), is in fact a woman. You may wonder what positive message does this send to our daughters? Well, we do say women can be anything right? Joking aside, this illustrates that women can be just as conniving and dangerous as men. Evil is not based on gender so don’t let gender bias blind you to the fact that some girls and women may be guided by hate, jealousy and bitterness toward you.

Lesson 4: What You Wear Does Not Define You

Understand that the premise of this story takes place in World Ward II era in London, England, a time of very different social norms from today around the role of women and dress. Very different from the Amazon culture on Themyscira in which Diana was raised. Her colleges (Steve Turner and his secretary Etta) try to help her fit in by dressing her in acceptable clothing but ultimately she slides back into what she feels comfortable in and what helps her complete her task. Her companions are so focused on her skills and the action at hand that Diane’s  dress isn’t an issue. Perhaps it’s also a reminder to not assume what is normal or acceptable dress, is normal and acceptable for everyone.

Lesson 5: Strength and Leadership are not Without Compassion

It’s easy to assume that a strong leader is one of authority at all costs, especially for women. To be taken seriously you have to discard the often viewed feminine trait of compassion. But as a leader you want people to follow you out of respect not fear. When Charlie is unable to complete his task as a sniper, he offers to abandon the mission as someone of dead weight and potentially bringing more danger than good to the cause. Diana understands he has more to offer the troop than just one task. She sees how the rest of the team feels for Charlie and his circumstance. She uses compassion to keep her team focused and driven and I believe that makes her role that much more embedded within the team.

Lesson 6: Humans Have the Capacity for Good

We can be quick to judge and condemn others based on their actions or words but maybe there is a story behind what occurred. That doesn’t justify what happened or lessen your reaction but perhaps we shouldn’t assume the person is inherently bad or should be written off. The God Aries in human form tries to convince Diana that the human race is evil and not worth her protection and devotion. She almost gives in to this logic but that’s an easy out. It’s easy to sum up an individual based on a single act but people often have the capacity of good and bad. We should encourage the good with our own compassion.

Needless to say the new Wonder Woman -Rise of the Warrior film offered the action I was looking for (I could even look beyond the heavy CGI) but brought so much more to the table for our daughters.