I thought it was going to be just one of those things that kids say.

It’s not that I didn’t take her seriously but you know how kids can be with things.

Although she’d never been on hockey skates before, I figured she might enjoy trying something new.

She was given a helmet and a stick and the opportunity to skate with a hockey legend.

The second she slid onto the ice and fell flat on her back, I cringed, thinking this would be the shortest relationship with a sport ever in the history of anything.

But instead, she got up with the help of another girl her age and off they went together.

The seed was planted. 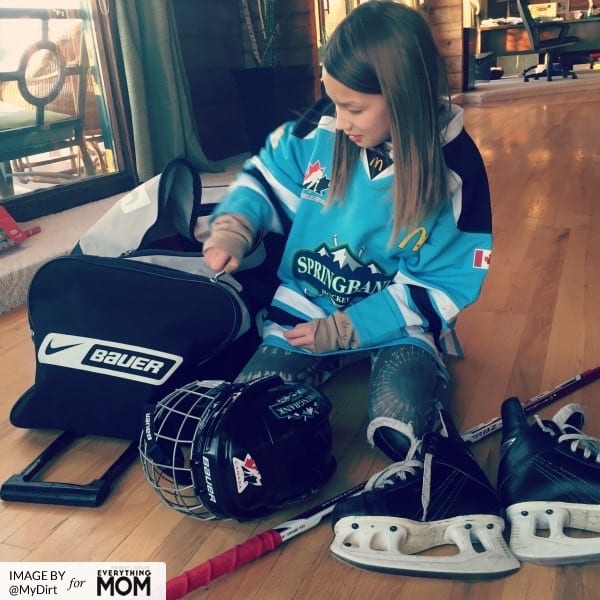 Stella spent the next hour struggling to stay vertical and more time on her bum than on her skates but I could see the smile thru her helmet cage nonetheless.

When the event was over, I greeted her at the edge of the rink and walked her to the dressing room to take off the equipment, that I was certain would never see the light of day again.

I knelt down at her feet to undo her skates and cautiously asked her how it went, she looked at me and smiling, said,

“Mom, can you sign me up for a hockey team?”

Almost 6 months later she was still asking me to find her a hockey team to play on. As I said in the beginning, I thought, maybe this was one of those things that kids say and then lose interest in, quickly.

atoMc Hockey has been supporting Canadian kids playing the sport for 25 years.

Going above and beyond with their sponsorship, they provide participating teams across Canada, a full set of primary jerseys and socks! 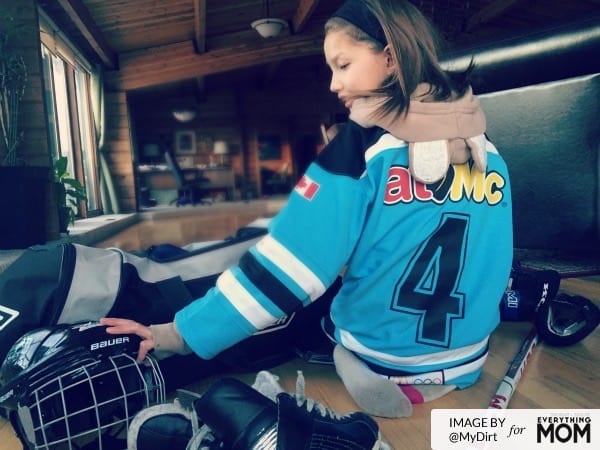 Two Hockey Girls on a Team of Boys

Starting the season on a team of all boys with the exception of one other girl besides herself, Stella felt exhilarated although way below the skill level of the other kids on her team who had all played hockey before.

The first practice was all new territory for both of us.

I needed to learn the locker room etiquette and how to be a cheering supportive hockey mom and she needed to learn how to put on her gear, how to play a position, how to hold her stick, how to skate backward and well, everything to do with the sport of hockey.

It was a rough start. I could tell she was feeling frustrated.

All the other kids had all the basic skills and then some, going into the season but this was Stella’s very first team, very first year in hockey, very first hockey practice, ever.

The coaches did some one-on-one time with her on the ice and from the bleachers, I could see her shake her head “no” over and over. 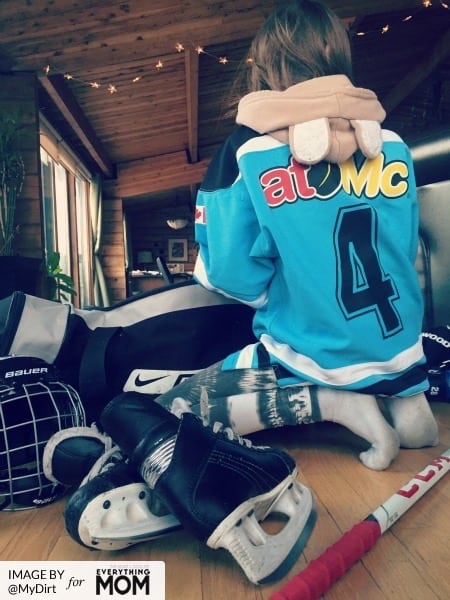 At the end of practice I made my way to the dressing room with knots in my stomach but rounding the corner I found Stella holding her brand new blue atoMc team jersey in her hand with the biggest smile on her face.

As she made her way to leave the dressing room, the other girl on the team said, “bye, Stella, see you at the game!”

And her coach stopped her and said, “great job today, Stella!”

And the boy who played goalie even said, “see ya, Stella” which can only be code for, “nice work Stella”.

She found her team! 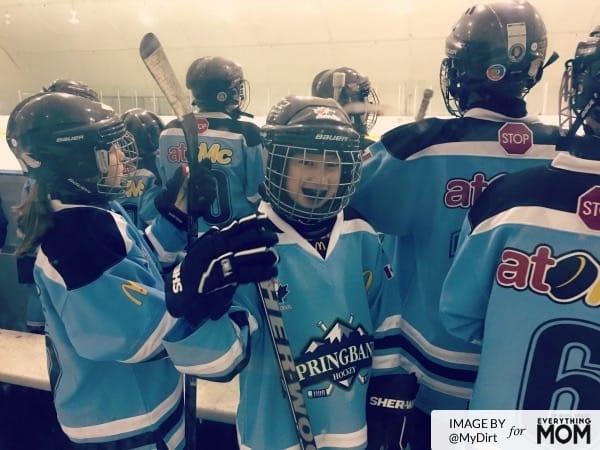 She carried her hockey bag proudly to the car (as instructed by the coaches, no parents should carry the bags) and climbed in the back seat, jersey still in hand.

I got in the driver’s seat and turned around to face her and asked, “so? what did you think of your first day of hockey?”

She looked up from her jersey and said, “thanks for putting me on the team, mom!”

For more information on McDonald’s atoMc program click here. If your child is already participating in this program don’t forget to enter your child’s team to win a Golden Moments Jersey. Details on how to enter can be found here. 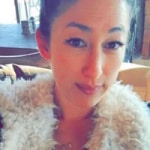 Author: Tiffany Grisdale is the Dirty Girl behind the saucily successful lifestyle blog, MyDirt.ca. She writes about her journey to figuring out what her life is going to look like after being a stay-at-home mom for more than 12 years. She is a mom to four girls, including twins, so it goes without saying that she is a goddess of efficiency and a pathological list maker. Tiffany shares the dirt on everything in her life. She is a cancer survivor, sushi devourer, runner and karaoke queen. Find her at: Facebook.com/mydirt // Twitter/Periscope @myDIRT // Snapchat @myDIRT // Instagram @myDIRTca