My last post was about app games you can play with a brother or sister. After I was done I declared that I was going to do my next post on board games. A game that most families enjoy playing together is………………. Monopoly! If you’ve never played it before it’s basically a game where you buy properties and collect money from other game players in the form of rent. There are many different versions of monopoly and these are 5 of my favourite to play with my family.

If you do not want to play a full game of Monopoly (it can get rather long) or you have younger siblings then you should check out Monopoly Junior.  The characters are cartoonish and there is a smaller game board. The game ideal for the game is the same as the original but the rules make the game play much shorter. You have to buy a property (not a choice) and when someone is bankrupt the game is over. It’s still a lot of fun.

If you like tech and Monopoly then you will really enjoy Monopoly Zapped. Along with the board game all you need is to download the free app and start the game. It has a faster set-up because the Chance and Community Chest cards, and the money is all electronic. To pay you use cash cards, like credit cards, that have 15 million dollars on them to start. You tap you card on the iPad to pay for properties and rent and transfer money to people and the bank. I love the option to auction off properties plus the many mini games. 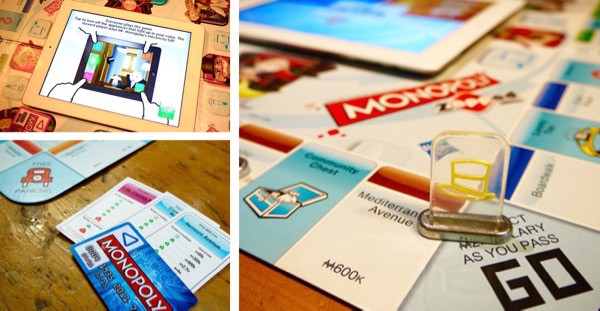 Many people like card games, which means they might enjoy Monopoly Deal. The reason I say that is because Monopoly Deal is the game of Monopoly in a compact card game, including collecting properties and using action cards. The objective of this game is to collect three full sets of properties. It’s a great game for road trips or at the cottage. There isn’t a board or money to set-up making it easy to take anywhere for a quick game.

If you’re a fan of Monopoly you might like the retro 80th Anniversary edition. The board and cards have a vintage design. Even the houses and hotels are wooden and the dice are tinted to look older. You’ll find a token from each of the past 8o years, one for each past decade.

Monopoly is a popular game that families play together and these different versions are a fun way to play as a family. Have you played Monopoly with your family? What’s your favourite version?