I have a lot of games on my iPad that I love playing but most of them are single player only. Sometimes I like to play these games with other people but not all apps can provide this type of experience. I found some multiplayer games that can be played on one device (so two people can play on one iPad) and these 6 are some of my current favourites. Some are free and some cost money but all of them are worth the download. 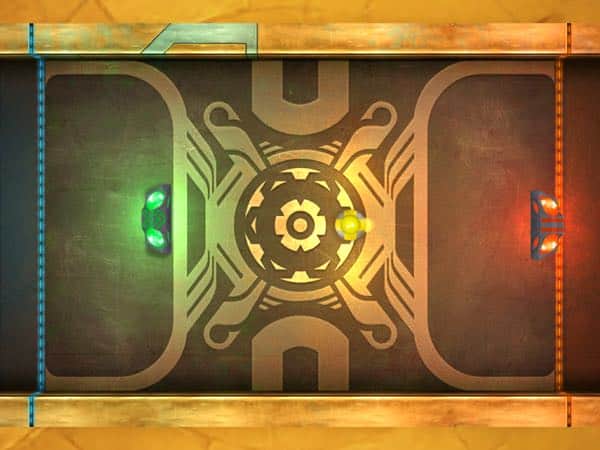 The whole family can have fun and laugh while playing Bloop. You can choose 2, 3 or 4 players in this game. Each player chooses a colour from the screen and the objective is to try to tap the most of your coloured tiles while they continue to appear and disappear as well as decrease in size. Your coloured tiles appear all over the screen so you have to reach around the other opponent’s hands to get to them. It can get pretty crazy, like twister for your fingers.

The objective of Badland is to get to the finish without being crushed or moving too slow. You are not playing against each other in multiplayer mode. You are just playing the single player level with multiple people. Each player controls their character by a corner fo the screen (based on the colour they choose at the start of the game). You can choose 1, 2, 3, or 4 players for this game. The look is very dark and fantasy world like. The game does have cartoon violence. For example, when these little balloon-like characters get caught in a wheel they pop because they are crushed.  This is a level game that has you moving to harder challenges with each level you complete.

In Olo you can choose to play 2 or 4 players (or play online). The objective is to get the most points, which you get by sliding different sized circles into the other person’s territory. When playing 4 player mode two people are on a team and those two people take turns trying to slide the circle into the other person’s territory. You only get a certain number of circles (aka Olos). The area where these circles spawn is the out of bounds. If you slide your circle into that area the other person gets to use it. It’s a great stategy game as you can use your circles to knock the other player’s pieces out of bounds. It’s a little like curling or shuffleboard.

In Lub vs. Dub each player has a character that races along a line filled with obsticles, power-ups and hearts. The race is to get to the other side of the screen first. Sounds simple? The crazy part is when the line you race on moves direction or when you press the button to “flip” to the other side to avoid obsticles. It’s hard to keep track but it’s crazy fun. There are power ups that you can use to your advantage in the game, like zapping the other player with lightning to deplete their hearts.

Single player games on your tablet can be fun but sometimes you can get bored or maybe your mom thinks you’re not spending enough time with your sister. These multiplayer apps are fun and great for road trips, rainy days at the cottage or just when mom wants you to play quietly with each other. Let me know if you enjoyed my game picks and don’t forget to share any multiplayer apps you love.