We learn so much for storytellers. They share with us legends and myths to explain the often unexplainable or illustrate an experiences difficult to put into words. For many cultures, storytellers are a way of sharing a community’s heritage. The story of the award-winning play Baobab returns to Young People’s Theatre for just a short period of time (October 13-23, 2015, but it is an show with experiencing.

Based on a West African story, Baobab tells the tale of a young boy’s quest to return water to the land amidst a relentless drought. As you walk into the smaller, more intimate studio stage on the third floor of Young People’s Theatre you are greeted by two performers playing on traditional African instruments. This sets the stage for a joyful storytelling experience.

The set is simple and the cast of only four employ the use of song, puppets, sound, and shadow to bring to life many fascists of this tale. The griot, a West African historian or storyteller, helps us travel through the tale. Shadow puppets take us through the background on why the village is in drought and years later we are introduced to Amando, a boy who is hatched from an egg dropped by the Baobab tree. We follow his quest and see him grow in courage and wisdom as he tackles his quest. 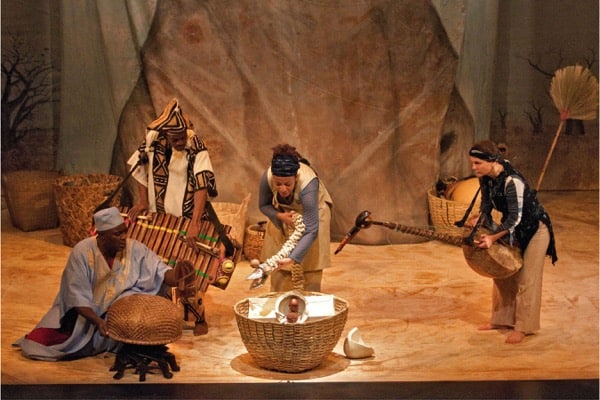 I love hearing native stories, discovering how cultures explain life around them. The story itself is a fascinating peek but how the story is told is what will win your heart. There’s something to be said about the inner happiness of many Africans and that comes through from the cast, especially Widemir Normil who plays the griot character. The whole performance had you smiling as the group sang songs, played instruments, created characters out of puppets and simple props, and transported you through the use of light and sound.

The play is indicated for young kids up to grade 3 but I found it to be an experience all ages would enjoy. It illustrated courage and cleverness in the boy Amondo, love and support found in a family and community, plus it showed the power of telling a story. I found myself shedding a few tears from the pure happiness felt from the stage and the young kids who were eagerly engaged.

You can learn more about Baobab and the line-up of other plays planned for the 2015/2016 season at Young People’s Theatre.