It’s not unusual to base our reality on our experiences and data we have access too. I mean, people once believed the world was flat, something to be sailed off of should you go to far. Explorers and inventors help us get a better understanding of the world around us, even parts we don’t see with our own eye. The Hubble telescope is one such amazing piece of technology.

On April 24 the Hubble Space Telescope will be celebrating 25 years! Twenty-five years of amazing imagery from space, giving us a glimpse of parts of the universe we never knew existed. The Ontario Science Centre is celebrating International Astronomy Day with a full program of events on Saturday, April 26 (10 a.m. to 5 p.m.). Discover backyard astronomy and aerodynamics. Build space-related crafts and make craters. Catch IMAX Hubble on a giant screen. Be inspired to explore the vastness of space or just the stars over your home. 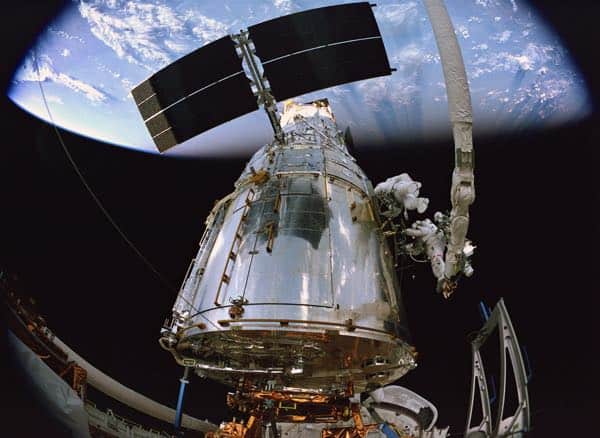 Image: Filmed with the IMAX® Cargo Bay Camera, astronaut John Grunsfeld, positioned on a foot restraint on the end of Atlantis’ remote manipulator system (RMS), and astronaut Andrew Feustel replace a Fine Guidance Sensor in the mission’s fifth and final session of extravehicular activity (EVA). Footage from these intricate spacewalks, captured with the IMAX camera onboard STS-125, is featured in Hubble. Narrated by Leonardo DiCaprio, Hubble is an IMAX and Warner Bros. Pictures production, in cooperation with National Aeronautics and Space Administration (NASA). © 2010 Warner Bros. Courtesy of NASA.

For a chance to win let me know in the form below your favourite place to gaze at the stars above or the last time you visited the Ontario Science Centre. 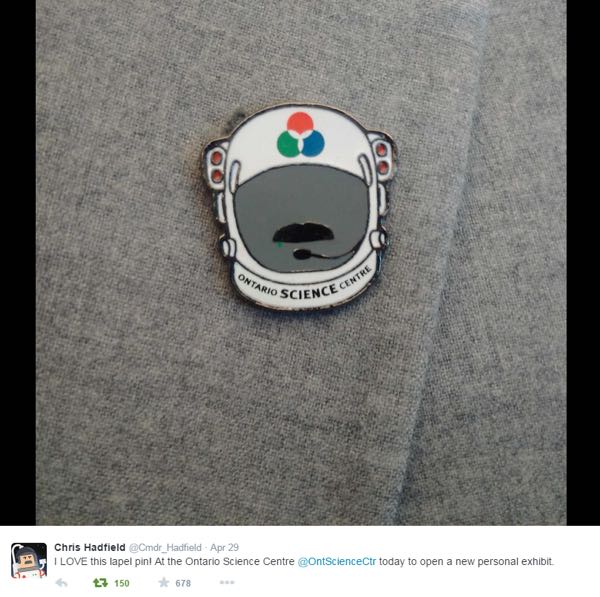 Update: We were just informed that a pair of these limited edition pins talked about by Chris Hadfield on social media will also be included in this price pack.

One (1) Out of this World prize is available to be won. Contest closes May 11, 2015 and is open to Canadian residents only. Winner must live within the Greater Toronto Area or driving distance to the Ontario Science Centre in order to claim their prize as transportation is not provided. Please see full contest rules.